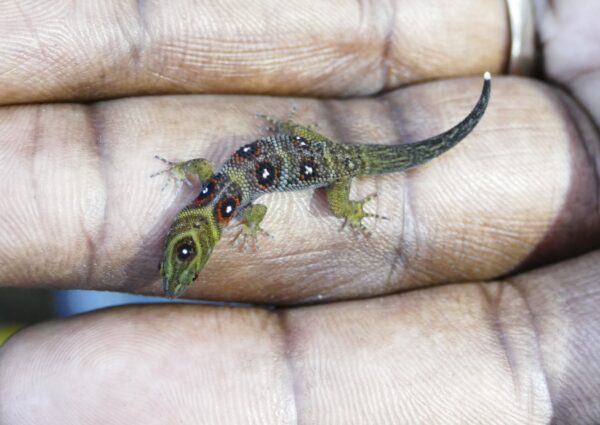 The Union Island Gecko Gonatodes daudini, also known as the Grenadines Clawed Gecko, is endemic to one small forest area on Union Island in the Grenadines. With a total range of only 130 acres the species is listed as critically endangered by the International Union for Conservation (IUCN). This beautiful but secretive lizard was only discovered in 2005 and until recently remained a hidden treasure of Union Island. Unfortunately, the gecko has recently been targeted by poachers who have illegally collected and exported the species into the commercial pet trade in the United Kingdom, Germany, Holland and North America. 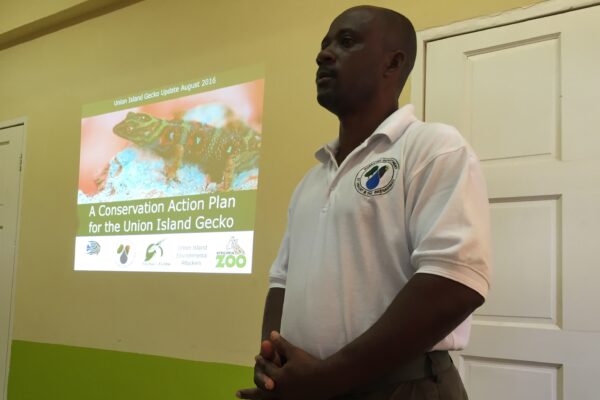 Through a collaboration of the Virginia Zoo, Fauna & Flora International and the Forestry Department of St. Vincent & the Grenadines an emergency project was initiated in late 2015 to achieve three initial objectives.

This initial phase was implemented in February 2016 and in the month since then a comprehensive five-year Conservation Action Plan has been prepared. The Association of Zoos and Aquariums (AZA) Lizard Advisory Group (LAG) steering committee has reviewed and endorsed the new Conservation Action Plan and we hope a number of AZA institutions will consider supporting this important work.

In August 2016, a working group from Virginia Zoo, Fauna & Flora International and the Forestry Department visited Union Island again to present the draft action plan to a various community groups. Our intent was to gain their approval before the Action Plan goes to the cabinet of St. Vincent & the Grenadines for government endorsement. During the trip we conducted additional fieldwork to plot the range of the gecko while also meeting with residents, educators, local businesses, environmental groups and government agencies on the island. We then crossed to the main island of St. Vincent to meet with the Forestry Director to prepare the document for cabinet approval.

Virginia Zoo and the other partners are now trying to move swiftly to secure funding to implement the most urgent elements of the new Conservation Action Plan. The most important action needed is to initiate a warden program for the forest occupied by the gecko, which is one of the most biologically diverse and rich habitat areas in the Eastern Caribbean. Community outreach, conservation education and strengthening enforcement of national wildlife laws are also urgent short-term objectives while strengthening international protection for the species through the CITES treaty is being pursued.