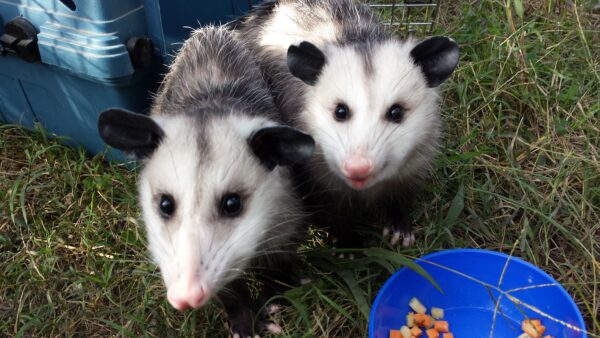 Program AnimalsFiona and Seamus Turn One!

Remember our orphan Virginia opossum siblings Fiona and Seamus? These two turn one year old this week. We do not have an exact birthday for them but our vet staff is estimating around April 15. Fiona and Seamus were hand raised by our vet staff and have become animal ambassadors for our educational programs.

Seamus recently appeared at one of our onsite school programs and Fiona was one of the animal ambassadors appearing at the Disney ZooTopia movie screening. Both have been doing great making appearances and meeting zoo guests.

Virginia opossums are the only marsupial found in North America. A marsupial is a mammal that has a pouch where it carries its young. The young opossums are not fully developed when they enter the pouch and spend the first two months of their lives inside their mother’s pouch.

Virginia opossums are famous for entering a defensive catatonic state, commonly known as “going opossum”. During this death feigning behavior the animal becomes motionless, which may last as little as a minute or it may continue up to six hours. This behavior is relatively rare and is most frequently displayed in young opossums. Instead, it is more common for a threatened adult to bare their teeth and stand their ground, or flee. Opossums are not dangerous as long as they are not cornered and their interaction with other animals and humans is kept to a minimum. But, they WILL protect themselves and their young if necessary. If you encounter a wild opossum the best thing to do is to let it move along at its own pace and not interact with it.

Virginia opossums are often considered a pest species but they help to maintain a clean and healthy environment. They eat all types of insects, including cockroaches, crickets, and beetles. They catch and eat rats, mice, and they consume dead animals of all types (carrion). They like over-ripe fruit, berries, and grapes. They could be considered nature’s little Sanitation Engineers as often neighborhoods with opossums tend to be cleaner than areas without opossums. Opossums are scavengers, which makes them extremely important to any habitat. By eating carrion, they also lower the risk of spreading disease in the area.

Fiona and Seamus will continue to appear in school programs and also make appearances in our Summer Safari camp to teach students and campers about animals in their own backyards. They may also make appearances this summer on our ZooLive! stage, located at the Animal Wellness Campus. Happy Birthday Seamus and Fiona!