Newest AmbassadorTraining of Dudley the Sloth

One of my favorite parts of my job is getting to train and condition new animals to be ambassadors in our educational programs. Recently I got the chance to work with one of many people’s favorite animals, a sloth. The Virginia Zoo partnered with Disney to promote the new movie ZooTopia. For this event we brought animal ambassadors to a private screening of the movie for our volunteers, staff and contest winners to meet before the movie. If you’ve seen the previews you may have seen that one of the main characters of the movie is a sloth – and it just so happens the Virginia Zoo houses a Hoffman’s two-toed sloth. 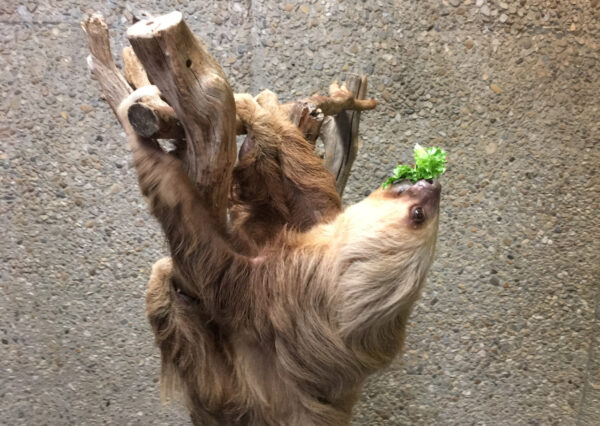 Dudley has been at the Zoo since May 1979. He is estimated to be 36 years old. He came from the Republic de Panama and has lived the majority of his life in the nocturnal section of our exhibit building. Dudley has long been a favorite of many keepers, staff and interns at the zoo. With the upcoming construction of our exhibit building it was decided that Dudley would become a program animal and join our other education ambassadors. With this decision came my job of conditioning him to be used for the ZooTopia premier to give him a chance to see new places and meet new people. 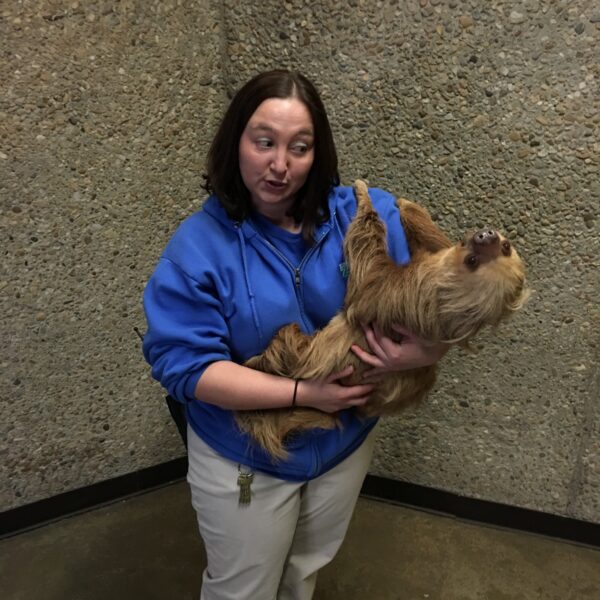 Dudley had been handled by his keeper staff, so he was already used to being picked up and held, but not for extended periods of time and just in the back areas of his exhibit. To condition him to be ready for programs, I worked closely with his keeper staff every day to learn more about Dudley and his specific personality. Each day I came over to the exhibit building and held him for varying amounts of time, slowly increasing the amount of time that he was out. Once we were comfortable with each other, we walked out into the exhibit building to meet new people. Dudley was very curious in his new surroundings looking at things and trying to see what he could climb onto. Sloths spend the majority of their lives upside down in trees so he spent a lot of time looking at his new surroundings from his favorite view. After he was comfortable being held in a new place, I introduced a tree that he could climb onto and hang from. I used this tree both in the hallway at the exhibit building and also in a classroom on the zoo grounds.

After a few weeks of working with Dudley he was ready for his debut at the ZooTopia screening. For his debut we had the tree set up in the entrance of the theater. Dudley climbed right onto the tree when he came out for his meet and greet. He climbed around and treated the guests to an up close view of an amazing animal. Many guests were mesmerized at the sight of Dudley and the chance to be so close to him. Dudley did extremely well at the movie screening showing us that he will make a wonderful addition to our ambassador animal team. This summer we hope to incorporate Dudley into stage shows at our Zoo Live stage located at our animal wellness campus and in our Summer Safari zoo camp. Keep an eye out as you visit the zoo this summer and you may catch him up on stage!