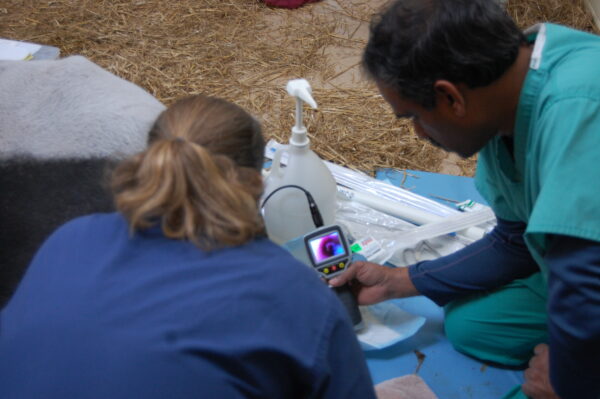 Last week, Malayan tapirs Annie and Rimba underwent reproductive assessments in order to gather information about their fertility and to help plan the next steps of producing offspring from them.

Who conducted the ASSESSMENT?

Two visiting scientists conducted this exam along side of Virginia Zoo veterinarian Dr. Amanda Guthrie. The visiting scientists were Dr. Buddha Pukazhenthi from the Smithsonian Conservation Biology Institute and Dr. Aime Johnson DVM, DACT who is a theriogenologist from Auburn University and who is working with Dr. Buddha on several projects. Theriogenology is the study of animal reproduction, including the physiology and pathology of male and female reproductive systems as well as the clinical practices of veterinary obstetrics, gynecology, and andrology.

What is a reproductive exam?

An ultrasound was used on both animals to examine their reproductive organs and to look for any structural problems or obvious pathology. For Rimba, semen was collected to evaluate the health and structure of his sperm to assess his fertility. For Annie, a speculum was used to examine her vagina and cervix.

The exams also consisted of complete physical exams, such as routine vaccine and standard bloodwork.

Bloodwork performed included CBC/Chem (to assess overall health), reproductive hormone testing, genetics and some other tests to look for disease markers of diseases common in tapir.

What were the findings?

The final reports from the reproductive specialists are still being evaluated, but so far everything looks good and no obvious problems that would impede reproductive success were found.