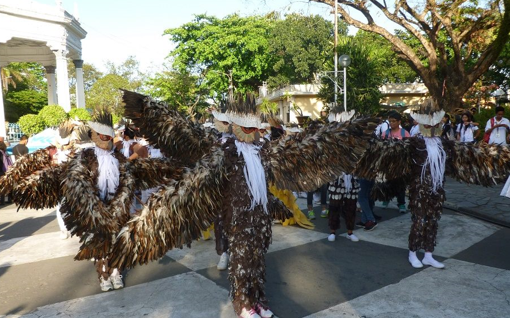 Effective conservation programs often require a multi-pronged approach that integrates applied conservation science, together with community-based education and threat mitigation strategies to be successful. Even the best wildlife management programs can only achieve short term results if the resident communities in the region are not engaged and supportive of the need to conserve their local wildlife. I was therefore delighted to take some vacation time at the end of November and participate in several activities for Provincial Wildlife Month in Negros Occidental (Philippines), including acting as one of the judges for the cultural presentation competition for High School students in the province. I was in Negros Occidental to visit one of Virginia Zoo’s new conservation partners, the Philippine Biodiversity Conservation Foundation, in preparations for several grant funded projects to begin in the Philippines in 2016 and was excited for the opportunity to see one of the longest running conservation community-engagement programs in the region.

A series of conservation education activities took place throughout the month of November, culminating on November 26th with an annual wildlife costume parade, which passed through the main downtown streets of Bacolod City to the arena where the cultural performances competition was held. Most of the High Schools in the province participated in the parade and wore costumes they had created of local wildlife species, as did many local government departments including the Bacolod City Water District, Department of Natural Resources, Forestry department and many other groups.

Many of the high schools that participated in the parade also participated in the cultural performances completion. The standard of student performances were very good, but special mention should go the students of Julio Ledesma National High School who performed a presentation based on the Visayan Scops Owl; and the competition winners from Negros Occidental High School who gave a performance based upon the conservation of the Negros Forest Frog.

Virginia Zoo will be actively working with the Philippine Biodiversity Conservation Foundation in Negros Occidental in 2016, partnering with the Philippine Biodiversity Conservation Foundation on surveys for Rufous-headed hornbills and Visayan hornbills; as well as implementing training workshops for zoos and wildlife rescue centers in the region to enhance animal management and care of captive wildlife in the region. Seeing just how strong the community support for conservation and good environmental stewardship is in the local community makes our work very worthwhile.