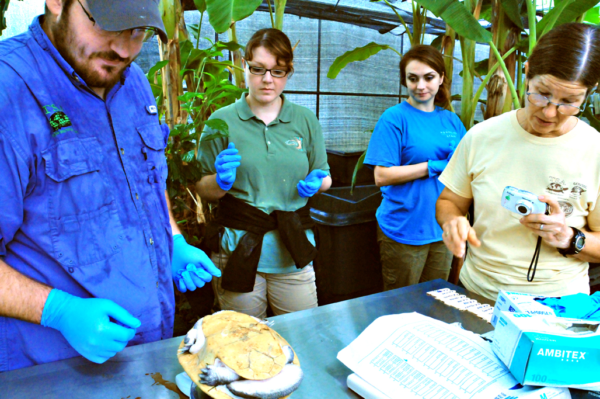 The Turtle Survival Alliance formed in 2001 in response to the Asian Turtle Crisis. The global partnership’s goal is zero turtle extinctions in the 21st century. They hope to achieve this by concentrating on turtle and tortoise conservation as well as global outreach. The focus is on living collections and recovery programs for numerous endangered chelonian species worldwide. The Turtle Survival Center in South Carolina focuses on 32 species of primarily Asian turtles and tortoises which are endangered due to the pet trade, use as a food source, and use of turtles/tortoises in eastern medicinal practices. Some of these species are so rare that they are considered extinct in the wild and are unrepresented in zoos or aquariums. The Turtle Survival Center serves as a holding and breeding facility for these animals.

Recently, the Tidewater AAZK chapter sent five members down to South Carolina to lend a hand at the center which has been hit hard by recent flooding and needed help making repairs as well as preparing the facility for winter. The Tidewater Chapter of the American Association of Zookeepers is comprised of zookeepers, aquarists, and other staff members from the Virginia Zoo, the Virginia Aquarium, and the Virginia Living Museum. The horticulture department at the Virginia Zoo sent us down with a donation of a variety of plants and trees for the TSC to use in animal enclosures. Once at the Turtle Survival Center we helped the staff members with various projects including repairing fences, adding leaf litter to turtle and tortoise holding areas to help prepare the animals for winter hibernation, scrubbing turtle shells clean of algae, as well as documenting weights and taking identification photos for many of the over 650 turtles and tortoises who live on the premises.

It was an amazing opportunity that allowed us to collaborate with fellow keepers and animal enthusiasts from the living museum, aquarium, and the turtle survival center. The staff at the Turtle Survival Center was extremely knowledgeable about the turtles and tortoises under their care. They were very welcoming to us and freely shared their knowledge and facilities with us. We were able to see many turtles and tortoises that were both gorgeous and unique species. The Turtle Survival Center does amazing work to help these endangered animals and we hope to be able to continue to collaborate and help them in the future.

How You Can Help