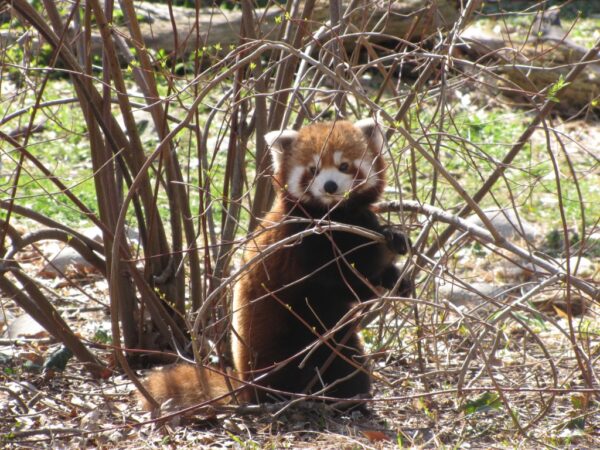 Fall is the air.  The weather has cooled down, the leaves have begun to fall and some of the Zoo’s animals are enjoying this change in the seasons.

The brisk fall air has encouraged the Virginia Zoo’s red pandas, Thomas and Cinnamon, to become much more active. Thomas is the brother of Cinnamon and son of Bernadette. He spent much of his time high in the trees over this past summer. Not very often did he come down first thing in the morning for his fresh bamboo, leaf eater biscuits, and grapes.  But, now that we are starting to experience the mid-October fall weather, Thomas along with sister, Cinnamon, has been greeting the keepers every morning ready to train and receive his favorite treat – grapes.

Both pandas have also been quite active throughout the day and have been seen romping around on the ground especially when keepers come to visit. Red pandas are native to the cool temperate bamboo forests of China, the Himalayas, and northern Myanmar making them much more adaptable to the cold weather.

Red pandas are listed as vulnerable on the IUCN Red List of Endangered Species due to loss of habitat. There are less than 10,000 with a continuing decline of approximately 10% over the next 3 generations. Here at the Virginia Zoo, we participate in the species survival plan of the red panda species and make our efforts to breed our pandas in hopes to help reach a target amount of individuals in captivity to ensure the survival of the species in zoos since their numbers are dwindling in the wild.

Be sure to visit the red pandas at the Zoo.