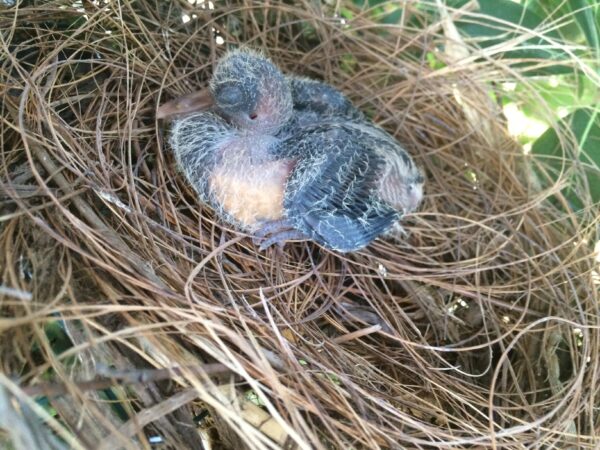 Luzon’s Bleeding Heart Doves are a ground dove.  With a distinct, reddish mark on the chest, these birds are easy to spot in our Asian Aviary’s.  The males tend to be larger and have a more pronounced red patch. With gray iridescent feathers, in certain lighting conditions they can appear to be green, blue or even purple. This helps with camouflaging them in the dense forest where they live.

Native to the  island of Luzon, Philippines, these birds are listed as Near Threatened. Primarily, due to a limited population on a small island and threatened because of hunting and logging.

The Virginia Zoo has been successfully breeding these birds for several years, including this newly hatched chick. The parents of this chick did not incubate their eggs so our Zookeepers  placed the eggs with a different pair of Luzon doves, who are proven parents. Because the population manager doesn’t recommend the Zoo breed the adoptive pair this year and they are proven breeders, they were the perfect candidates to raise the chick.

All species at the Zoo are managed by an advisory group, comprised of experts from around the country. This group analyzes genetic diversity within captive breeding populations. They ensure that genetic diversity is maintained.  Even though the adoptive parents, aren’t hatching their own chicks at this time, their experience with raising young ensure that this new chick will grow up and contribute to the conservation of this species.

The Zoo continues to be committed to conservation.